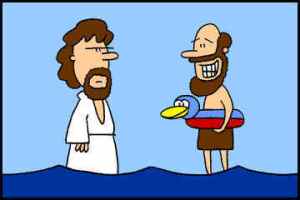 I couldn’t pass this image up when I found it. But it’s an accurate portrayal of when Peter tried to walk on water and got all crazy when he noticed HE WAS TRYING TO WALK ON WATER! In short, though, he doubted.

Doubts and questions are a part of life. But they’re also a part of life in Christ and faith in God. It seems odd that so much of Christianity is unseen. For instance, have you personally seen Jesus? I’m not talking about a dream you had or if his face appeared in your cereal this morning. The bulk of our journey towards God is step after step in obedience to what the Scriptures say and trusting that God is guiding that path.

We’re forced to live in tension: the tension between knowing and trusting, between seeing and believing.

Jesus says that the nature of God’s kingdom is unlike the kingdom of earth. In God’s kingdom, seeing is not believing. After all, people saw Jesus float into the sky and still doubted. In John 20.29, Jesus says to his disciple Thomas, “Have you believed because you have seen me? Blessed are those who have not seen and yet have believed.” Is Jesus calling people to set aside their intellect, reason, and logic (as some claim)? Absolutely not. Jesus is revealed in a book after all.

The point? There will always be questions and doubts as situations and circumstances arise in your life. But don’t give those doubts power. Voice them. Seek God’s promises and character in the Scriptures, in prayer, and in the community of faith. And remember that often times believing is seeing. Walk in what you know of God (obedience) and trust (faith) that He’ll handle what you don’t know and may never know.