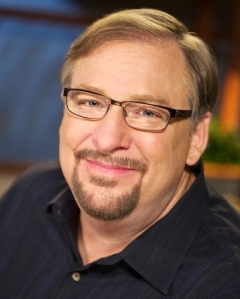 Rick Warren has nothing to offer me, or the world for that matter! That’s what I used to think. Arrogant right?  I was at a conference in California a couple years ago when Andy Stanley interviewed Rick Warren–the godfather of megachurches. The first line out of Andy’s mouth was along the lines of: “As soon as Rick stepped out on stage, some of you in here immediately wrote him off and started judging.” Heart enter stomach, throat collapse, turn red. Guilty.

From that point on I’ve really tried to be a learner on every level, meaning, there’s something to learn from anyone. And if I can’t learn from Rick Warren, that just wreaks of youthful arrogance. Recently John Piper interviewed Rick, all on the doctrine present in The Purpose Driven Life (a book I mocked–again, arrogant). This interview made my stomach churn.

Is it because Rick is a moron? Doesn’t know doctrine? Only cares about a big flashy church? Nope. It’s because I’m not a tenth of the man of God he is. I don’t know how many Scriptures he quotes from memory, but it’s absurd. He’s read all of Jonathan Edwards’ works and understands them. I feel like a kindergartner putting letter sounds together when I read Edwards.

I was ashamed that I didn’t give the guy a chance just because I didn’t agree necessarily with his approach to “church,” which is a big thing on my mind lately and will be blogging about I’m sure. Just watch the video (little pieces at a time even) and I hope you’ll thank God with me that if someone’s going to represent the evangelical church on a broad scale, better Rick Warren than me.