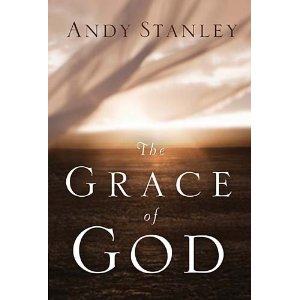 For the most part, pastor Andy Stanley of North Point Community Church in Alpharetta, GA writes books on leadership and practical theology (e.g., exposing the evils of greed, hate, lust, envy…). If you’ve heard him preach there is no question he is a gifted communicator. He speaks often about the grace of God and finally, at the challenge of a publisher, has written a book called The Grace of God. The following is a review of his book for the booksneeze program.

The book is divided into two halves, the first of which is devoted to the story of grace in the Old Testament. Chapter by chapter, Andy takes an Old Testament figure or encounter and unwinds the threads of grace that are woven throughout. From Adam and Eve to Jonah, the reader discovers that “grace is more story than doctrine” (xiii). Such a statement can land a pastor in hot water, especially with the strong push for Gospel-centeredness today. But Andy doesn’t waver in his approach. He travels the span of the story of Israel and show that God’s grace is, in fact, the story of God’s people. The Old Testament portion is filled with rich one-liners, for which Andy is famous, that seer into one’s mind and cause a moment of pause to ponder their implications. For those who criticize Andy because he doesn’t spend enough time in the Scriptures, this book reveals how gifted an expositor Andy is, and not just an expositor, but a teacher who draws a straight line from head to heart to hands. In other words, one won’t wonder how to apply what Andy is communicating.

The second half of the book, after a brief selah in the middle, is devoted to the New Testament story of grace–which is really the continuation of the story of grace from the Old. The focus is on Jesus, his life, encounters, teachings and stories (parables). “The story of Jesus,” writes Andy, “is the story of God drawing near to those who had been pulled away by sin and were subsequently pushed away by the self-righteous” (134). What the reader will understand more clearly than ever before is that grace is “extravagantly unfair” (187). The very point of grace is that it is unfair. Mathematically it makes no sense. Andy concludes the book with a section that challenges local churches, though I do wish he had clarified between the church as an institution and the church as the people of God. The point remains, however, that “the church is most appealing when grace is most apparent” (193).

As an individual, as the Body of Christ, whether a pastor or a painter, this book cannot help but bring its reader into a posture of humility and gratitude for the extravagantly unfair gift that is the grace of God.

I won’t run off a list of scriptures that talk about how God’s forgiven us for our sin and did so through the sacrifice of His own Son. But I will ask, what if you and I forgave others to the extent God has forgiven us?

Some of this depends on how you view yourself in relation to God. If you don’t believe in God this ‘what if’ falls short. But even if you don’t, pretend you do. Just for a minute, buy into the belief that sin is a willful decision to violate the word of God. In essence, sin is like spitting in the face of a parent or guardian who is trying to protect you by setting boundaries. We’ve all done that at some level.

Yet regardless of the seriousness of our sin, God forgives. Through Jesus, God absorbs the insult, absorbs the rebellion, absorbs the slap in the face, and He offers reconciliation, relationship, and redemption. What if today you did that? Is there someone who has wronged you and doesn’t deserve your forgiveness but would be humbled by your gracious offer of it? Maybe they wouldn’t be humbled, but would it release you from the bitterness and anger you harbor as a result of not offering forgiveness?

What if you forgave…what if I forgave? Could that possibly uproot some of the hatred or anger in the world?