There are certainly a variety of methods that have proven effective when it comes to disciplining children.

Whatever the punishment you decide to dole out, do consider these words from Tedd Tripp in Shepherding a Child’s Heart:

“Sadly, most correction occurs as a by-product of children being an embarrassment or an irritation.”

I admit, I fight the embarrassment motivation off pretty well, and it’s tempting! As a pastor and school administrator, now with a kindergartener (and a couple yellow lights under his belt), I have those meandering thoughts of how my kids are making me look. Ultimately, though, I don’t think my 2-year-old’s inclination to draw on the piano with a sharpie means I’m a bad dad (what’s a few less white keys??)

But it’s that second motivation that gave me pause when I read it–an irritation. Look, I don’t feel guilty for saying that my kids irritate me sometimes. We decided to have several kids close together.  That means at any given moment, with 4 kids 5 and under, there are at least two kids whining about something and one antagonizing another. It’s a symphony of chaos and beauty.

Yet how many times have I used my irritation as a catalyst for discipline? Ugh…Dang you, Tedd with two d’s.

But it’s true. I’ve disciplined out of that motivation with great regularity over the years. Thus the point of the book, namely, parenting is about shepherding hearts. Being near and corralling and leading and guiding…not getting irritated and dictating or blasting.

Discipline is intended to bring about the fruit of peace and righteousness according to Hebrews 12:10-11.

So we must ask, how is my disciplining training? What lesson am I teaching? What principle is being reinforced? How is the heart of God being communicated? If they get what I’m teaching them, how will they be better off later?

This raises the bar in parenting, in education, and in other settings where discipline is part of the job description. But there is grace for parents and educators. Thanks be to God! Regardless of how it’s been in your home, classroom, or wherever, today is today.

Helicopter parenting is a thing. There are books about it, spoofs of it, and it’s a wildly popular practice.

The long and short of it is that helicopter parents hover over their children in most every venue of life–school, sports, social, spiritual–in such a way that the child or teen (or young adult) is never really left to herself to survive or figure it out. Especially if that means stumbling or someone tripping them up.

Be childlike again and imagine this: a mom hovering over her son, keeping  a close watch over the grade book, seeing he didn’t do as well as he could have on an assignment. She lands the chopper at school, strides (somewhat passive aggressively–though you don’t know it right away) into the teacher’s work space, and proceeds to explain why Jimmy deserves a higher grade…any of the following arguments may ensue.

Notice the use of We. That’s mom acting as if she and her son are one. It’s a tell tale sign. In any case, the thrust of each argument is the same: my child is a victim. Of what? Not getting the grade I want him to have.

Are there legitimate reasons why Jimmy may have blown a test? Sure. Was he ill? Did someone in the family pass? Does he just flat out not get it? Those things are possible and do happen. Communication is key, of course.

This scene is playing out on every level, though. From kindergarten through college. Yes, college. I have heard professors speak of parents calling to argue about their kid’s grade, even on single assignments.

Whether it’s grades or a disagreement with another students, the helicopter parent is always alert and ready to intervene.

Smothering is a hard way for kids to grow, kind of like a fire. “We need this fire to get bigger and warmer and more beautiful.” “Smother it!” “Oh, okay.”

I have helicoptered over our oldest. Especially in public play scenarios–playground, soft play (AKA, Bring your kid here if you want sickness to spread through your household Play), etc.

I would keep a close eye on Ben (now 5). Waiting for someone to look at him the wrong way, run past him too fast and thus need my scolding (you’re welcome other parent staring at your phone), or in the event that he might fall, trip, stub his toe, get a hangnail, or look constipated.

I’ll admit it. I hovered. And it’s been hard to stop. To stop making sure he never gets scraped or has to struggle. To stop making excuses for why he colored outside of the lines more than other preschoolers (weak hands….mine are small, too….it’s the economy??).

And thankfully we have friends around us trying to prevent doing the same, so we can laugh about our neurosis together. There are things kids can’t fully do or think through themselves; that’s why parents matter. But some struggle is good.

Not letting them struggle when they’re safe in your care could lead to some silly and socially devastating experiences later. And to illustrate… 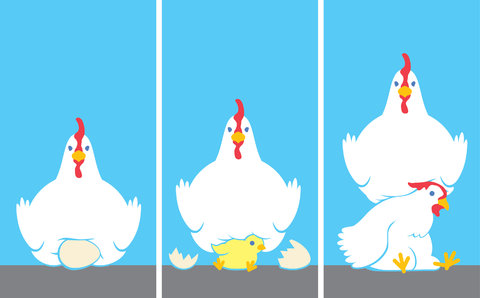 Let your baby boy or sweet little princess feel some of the tension they will face evermore. In other words, coach them. Don’t take their place on the court.

They will eventually work alongside that difficult kid in class you’re trying to keep them away from. The coach who doesn’t always say something encouraging will be their boss. The players may be different, but the game will look pretty much the same.

God’s grace be to all of us trying to prepare kids for this world. It’s hard and vulnerable and tiring. And it’s so worth it.