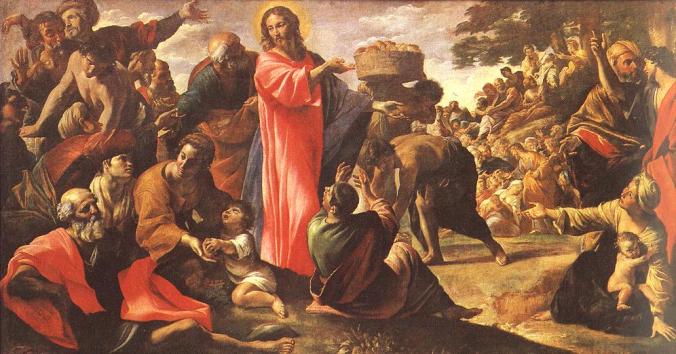 Moms, the struggle is real. I’m not a mom, but I am married to one. We have four kids, the oldest of which is five, three of which are girls, which means there’s more drama in my house than on all of daytime television.

And when I find myself taking care of all of them solo, I wonder how my wife does it the other six days of the week. But what’s that have to do with Jesus, you ask?

In Mark 6, there are 5000 men and who knows how many women and children. The disciples have just returned from their maiden missionary voyage to report all they’ve done in Jesus’ name. But Jesus says, “Shhhhh….you need to rest.”

Out on the boat they go for some rest and relaxation. After all, you can only pour so much of your cup out before the thing is empty. Time to refill.

BUUUUUUUUUUT here come all those needy people. It’s like no matter where Jesus and the boys go, the crowds find them.

Jesus has compassion. “They’re like a sheep without a shepherd,” lost, wandering aimlessly without a clue of how life is supposed to look. After instructing them even more, Jesus feeds them. Actually, he makes the disciples feed them after miraculously multiplying the fishes and loaves.

So I’m reading this in preparation for Sunday’s sermon, and I think, hold on one daggum minute. I’ve seen this happen. In fact, I see it almost everyday.

Lindsey has 2 or 3 kids with her depending on the weekday. Inevitably I get a call or text about 2pm. That’s supposed to be nap time for the kids, which would mean mommy time, which would mean rest or something productive for her own sake.

But that 2pm text usually reads something like, “Addie sabotaged nap time today” or “Caroline is still awake and asking where you are” or “Why do my kids hate me?”

I try to reassure her it’s only a season…that’s going to last another 5 YEARS!

And before you do the whole, “Cherish it because it goes by so fast and you’ll miss it” thing, I hear you. But I’d be better off slapping a lion in the face and trying to outrun it than telling that to my bride.

There will be times, dear mommies–maybe every single day of the week–when you’re at the end of your proverbial rope.

Because you pour yourself out and out and o..u…..t.

And still, here come those needy people. They’re hungry, tired, scared. They have a belly ache or need a drink of water for the fourth time in 14 minutes. They have no idea what life is supposed to look like. That is, no idea except what you show them.

You’re poured out for them. You resemble the disciples, called by Jesus to shepherd and feed and love those who can’t seem to fend for themselves.

So you have compassion. You shepherd those little hearts (sometimes with the spanking spoon), but always with love. Even when it doesn’t feel like love, it’s love. You’d roll yourself across burning coals for those little punks.

One thought on “Weary Mama, Jesus has been there”