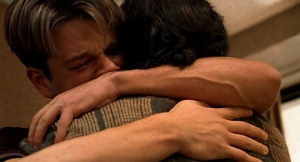 The scene goes on until Will breaks down and his otherwise tough facade crumbles.

I feel like that’s what God does to me when I respond in a less than stellar way to the unexpected.

So much of life is unexpected.

Unexpected circumstances, be they tragic or triumphant. Unexpected people, be they pleasant or petty. Consider how much of your life is spent encountering the unexpected.

I like routines, schedules, plans, and honestly, predictability. But God is constantly messing up my plan and schedule and the predictability of life. And how do I usually respond? Anger. Anxiety. Aggravation. A litany of alliterative A-words.

But what if, in all the  unexpected, God’s doing something better than my plan? What if he’s growing me through the unexpected in a way that just wouldn’t have happened if I got my way? Can I possibly bring this back around to Good Will Hunting? You bet I can.

Will didn’t expected anyone to ‘help’ him because he didn’t think he had a problem. Eventually the barriers were broken down, as I so passionately illustrated above. But even more unexpected was the change in Sean–the bearded Boston Red Sox fan therapist.

See, Sean hadn’t taken any chances or really lived life since his wife died a few years before. But his unexpected relationship with Will changed him. He tried to resist the impact Will was having on him, but after a while he embraced it and stepped out with a renewed sense of hope.

The next time your plans are interrupted or someone slows you down, take a breath and consider whether the God of the unexpected is trying to do something unexpected in your life.